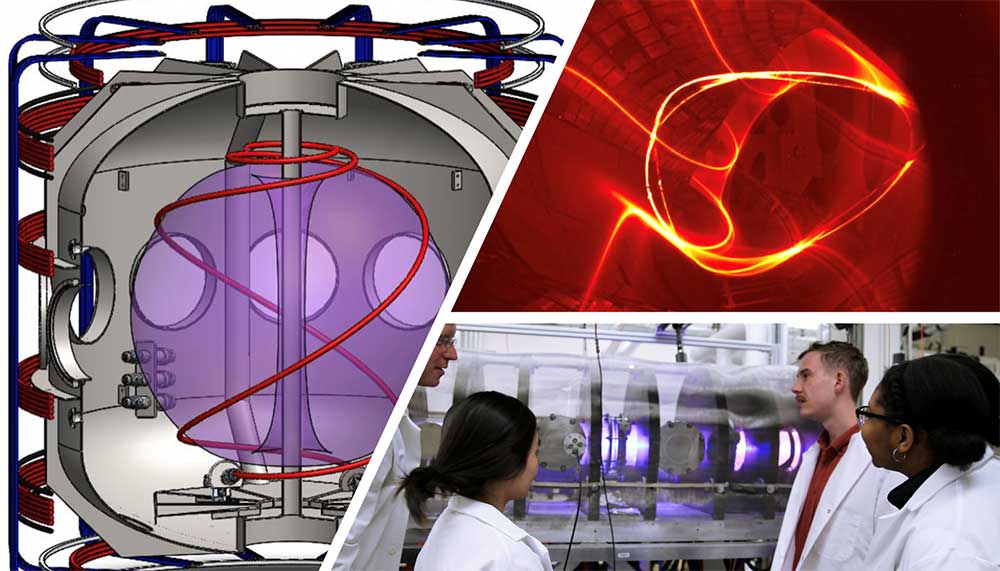 Fusion reactions combine light ions to produce heavier nuclei, along with energy associated with mass conversion. This energy can be converted to electricity, or the energetic particles can be used for non-electric applications. Faculty and staff in this area are exploring a variety of technologies to produce fusion energy. The state of matter of the fusion medium is called a plasma—a highly charged gas that can be confined in strong magnetic fields. Therefore, plasma physics is the fundamental physics discipline for fusion energy science, but it also can be used for a variety of other science and industry applications.

To reach fusion conditions, the high-temperature plasma is confined within a vacuum chamber by strong magnetic fields. Exploring the optimization of various configurations to accomplish this magnetic confinement is a key aspect of fusion energy-related research. The department houses a unique magnetic confinement fusion experiment, the Pegasus spherical tokamak under the supervision of Professor Emeritus Fonck. This device is being upgraded to become a center for studies of non-inductive current drive in tokamaks on the national scale. Assistant Professor Diem is responsible with her research team for applying radio-frequency waves to heat this unique tokamak plasma.

There are two other major magnetic fusion experiments on the UW-Madison campus. They are HSX, a stellarator, in the Department of Electrical and Computer Engineering, and MST, a reversed-field pinch device, in the Department of Physics. All of these facilities create a strong, collaborative research environment for faculty, staff and students from multiple departments across campus.

As fusion science progresses, large-scale facilities are addressing the high-performance regime. Engineering physics faculty in fusion energy science are participating in several large-scale facilities around the world, among them the ITER tokamak in Cadarache, France, well as the two U.S. national user facilities DIII-D and NSTX-U. The research group led by senior scientist McKee studies turbulent fluctuations in DIII-D and NSTX-U based on beam emission spectroscopy (BES). The collaborative research at the Wendelstein 7-X stellarator in Greifswald, Germany, is coupled to an on-campus stellarator program by means of the HILOADS international laboratory of the German Helmholtz Association. Assistant Professor Geiger’s group studies the ion-heat and impurity transport in the core of W7-X, together with comparisons between HSX and W7-X plasmas. Professor Schmitz‘s group investigates the plasma edge and plasma material interaction in stellarator geometries with a focus on W7-X.

To realize sustained confinement, materials have to be developed that withstand the conditions in this harsh environment. The MARIA linear helicon plasma is used to study plasma material interactions and fundamental atomic processes in the plasma surface interaction domain. This experiment is supervised by Professor Schmitz.

The Department of Engineering Physics has a robust theory and computation effort spearheaded by Professors Hegna and Sovinec, who use analytic and computational techniques to study the dynamics of high-temperature plasma.

Prof. Hegna is the director of the Center for Plasma Theory and Computation (CPTC), which fosters collaboration among campus plasma theory efforts. His current research interests include the macrostability of tokamak and stellarator plasmas, optimization of stellarator confinement, turbulent transport and pedestal stability in three-dimensional configurations, plasma edge and divertor modeling physics. Professor Sovinec applies nonlinear numerical computation to problems of macroscopic stability and magnetic relaxation in tokamaks and other configurations. He leads the international NIMROD code development team. His current research interests include numerical methods for extended MHD modeling, the macrostability of tokamaks and stellarators, and tokamak disruption dynamics.

Fusion technology addresses the engineering issues that must be addressed to build a reactor capable of producing electricity from fusion. Professors Lindley, Henderson and Wilson have active research programs to address such issues as heat removal, radiation damage to materials, tritium production, magnet design, neutron and gamma transport, and component lifetime for nowadays experiments and future fusion reactors.

The plasma medium that is intensively studied for fusion application offers a broad range of applications from processing plasmas, to plasma coating and plasma propulsion. One direction that is actively pursued in the Department of Engineering Physics is the development of a plasma source for plasma-based wake field accelerator. Professor Schmitz is a full member of the AWAKE project at CERN and his group operates the Long Wake Field Accelerator Plasma prototype (LWAP-proto) cell.