We are honoring John as an executive who has advanced technology in structural engineering and fostered a work environment that has allowed countless engineers to develop and succeed.

I grew up on Milwaukee’s east side and attended UW-Milwaukee for my undergrad. It was a great education but a “commuter school” experience. After graduation, I moved to Chicago and worked there for a few years before deciding that I really needed a master’s degree to achieve my career goals. I was attracted to UW-Madison by well known and leading faculty who had written famous textbooks in wide usage, the beautiful campus, and because it was far enough away so that I could lead a “real college” experience.

I developed a stronger sense of confidence in my ability as an engineer. The time I had to delve very deeply into the theoretical underpinnings of what I had learned as an undergrad really helped me become a strong engineer. I came to UW wondering if I really had what it takes to be successful as a structural engineer, and left knowing I could be a leader.

Which professors had the greatest impact on you?

I had two very influential professors during my time at UW-Madison: Chuck Salmon, who was my advisor as well as an instructor of mine, and CK Wang, who taught matrix methods of analysis. Chuck Salmon and I grew close during my time and extended our friendship post-graduation. He believed in me and helped build my confidence. CK Wang was the most memorable professor I ever encountered. He had a strong presence on campus and was very old-school. He was also an expert in computer applications in structural engineering, which were new at the time. He was simply an amazing teacher. He would come into class, make up an example problem, and then together we would solve it during the class. I learned so much about core engineering fundamentals and computer skills from him.

My wife, Debbie, and my children, Courtney, Derek and Dylan. When you run a company, your family extends beyond who’s at home to everyone in the company. This meant my family quickly grew from five to a family of nearly 300. My real family had to make sacrifices so I could do my job. Debbie and the kids have supported me throughout my career. Rich Bub and John Goetter at GRAEF were instrumental in my career advancement and development at GRAEF. In business, longtime client Bill Shook at Clark Construction was a great mentor to me, and at UW-Milwaukee, Professors Fattah Shaikh and Don Sherman.

I like to golf, bike, travel and see Broadway shows. I volunteer on several local nonprofit boards, including UPAF and United Way. 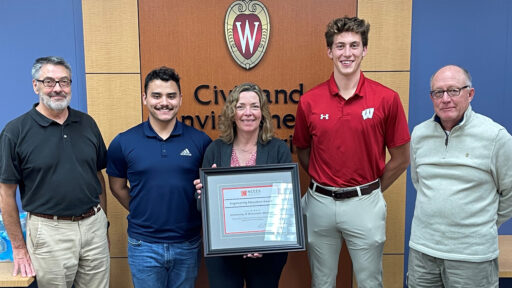