Congratulations to all the Auto Project teams that competed in the spring and over the summer of 2022!

There’s always more to do and learn. Interested in getting involved with one of these Mechanical Engineering student groups? Reach out now! You can contact groups directly or email dept@me.engr.wisc.edu and we’ll get you to the right place.

Formula SAE (Internal Combustion) struggled to get their vehicle completed but passed technical inspection and completed a portion of the endurance event before experiencing an event ending issue. The team did well in Design and competed in Design finals. This was the first year the team constructed a full monocoque (ME 351 & 352 project) which was a success and will be utilized for several years to come.

Formula SAE Electric was able to complete all the technical inspections but could not correct an issue with the drive motors. The team did get their new accumulator (battery modules, fuses, and monitoring equipment) completed. The team also designed their own high speed wheel motors and motor controllers. They did not have enough time to properly program the motor controllers.

The Autonomous team competed in the EV Grand Prix electric go-cart autonomous competition hosted by Purdue University. The team won 3rd place and were the only ‘new’ team to the competition and finished in front of several veteran teams. The team started preparing for this competition 3 years ago and were delighted to finally compete. The basic architecture and autonomous functionality of Wisconsin’s go-cart was developed and implemented by a ME 351 & 352 design team. The team added the necessary autonomous control algorithms this past year prior to competition.

The Autonomous team competed in the SAE Autodrive Challenge II at M City (Autonomous testing facility managed by the University of Michigan). The first year of this 4-year competition concentrated on Project Management and Autonomous perception. Each team developed a perception cart equipped with the sensors that will be used on their Chevy Bolt autonomous vehicle in years 2 thru 4 of the competition. Each school rolled their perception cart to a designated location in M City and then was responsible for transmitting a CAN message for every object that their software detected. One challenge concentrated on street signs and stop lights while the second challenge included animated objects (i.e. pedestrian, deer and a car) within their perception zone.

Wisconsin Autonomous was 1 of 3 new university groups who had not competed in the previous autonomous competition, so their learning curve is much higher than the 7 returning teams. This year, Wisconsin placed 3rd in the Project Management event.

The Wisconsin Baja team showcased their first 4-wheel drive Baja vehicle and won 6th place amongst 100 entrants at the Baja SEA Rochester event. The 4-wheel capability was designed, tested, refined, and implemented by ME 351 & ME 352 design teams during the last 2 years. The 4-wheel drive performed flawlessly while completing the 4-hour endurance event.

The competition moved to a new format this year; the presentations were done virtually prior to the competition and only the snowmobile dynamic events were held at the venue.

The Wisconsin Snowmobile team passed their technical inspection but were not able to achieve the minimum speed on the first day. The team had added a resonator (sound abatement) and a catalyst to the exhaust system to achieve the competition clean and quiet goal. Unfortunately, the catalyst was under sized and created an exhaust restriction which limited their power. After reprogramming the engine controller for higher exhaust residuals, the team was able to achieve 45 mph on day 2 and competed in the rest of the events. 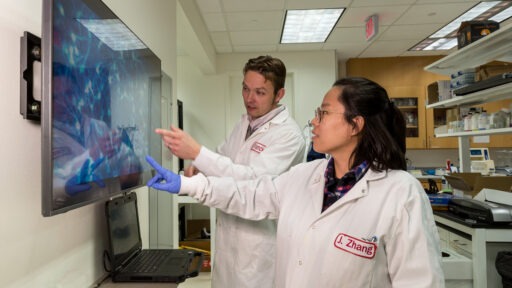