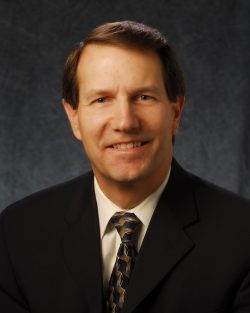 Each year, the College of Engineering recognizes outstanding alumni during Engineers’ Day—a celebration of engineers, held on Homecoming weekend. Brian Mullins is among the engineers we will honor in 2018 at an Oct. 19 banquet.

Leveraging his training as a civil engineer in his career as a construction attorney, Brian was known for his work ethic, attention to detail, and leadership. He was renowned for his work in advocacy, role in mediation, and contributions to engineering and legal education. He played a major role in some of the state’s largest public and private construction projects and was active in the State Bar of Wisconsin, co-founding and chairing its construction and public law section. Brian was universally respected by his peers, who honored him multiple times over with best lawyer, super lawyer, and lawyer of the year awards.

Brian passed away in February 2018. We are honoring him posthumously for the instrumental role he played, both as a civil engineer and as an attorney, in developing construction law in Wisconsin.

Pam Mullins, Brian’s wife of 38 years, and Mallory Mullins, one of Brian’s four siblings, talked with us about Brian’s work and his passion for UW-Madison.

Why did Brian choose to attend UW-Madison?

Mallory: Brian’s and my father was an alumnus of the engineering program at the University of Wisconsin-Madison. Being a Badger was a big deal in our household. Our father was very proud to have received his civil engineering degree in 1950, so in our family, you’ve got to be a Badger. It couldn’t be anything else.

What are some of Brian’s fondest memories of the time he spent on campus?

Pam: Brian always made time for attending UW football games—which he did throughout his entire life. He was a big supporter. Throughout his UW education, he had a lot on his plate, especially when he was going to law school, because he was teaching a legal aspects of engineering course for engineers and also worked a job. With all of that, he didn’t have a lot of free time.

How did Brian’s experiences as a student shape his career?

Mallory: In law school, his focus was in construction law.

Pam: He knew that he wanted to remain in Wisconsin. But, upon graduating law school, we did go up to St. Paul where he practiced law at Moore, Costello & Hart. We were there three years before returning to Madison when he was recruited to help start the Midwest office for Wickwire Gavin, which was based in the Washington, D.C., area.

Mallory: Wickwire Gavin had a national practice in construction law and they wanted to open a Midwest office. They sought out Brian and the co-founder of the office, and the two of them said, “Happy to do this, but it has to be in Madison.”

Pam: He was always involved in engineering and the UW. In 2006, when he joined Axley Brynelson, he became the co-founder of its construction law group

Of what professional accomplishments was Brian most proud?

Pam: He was very proud of receiving the Construction Lawyer of the Year award in Wisconsin for six of the past seven years. It is an award selected by his peers. He also was one of the original founders of the Construction and Public Contract Law Section of the State Bar of Wisconsin.

Mallory: That’s a big deal; all the lawyers in Wisconsin belong to the State Bar, which licenses us and provides continuing education to lawyers. It has various specialty sections, but it did not have a construction and public contract law section. Brian recognized this void and did something about it. He was a founding director of the section, and he was an officer of the organization as well, so he really got it off the ground, as well as kind of set the framework its future development.

Pam: He also was the author of more than 200 publications on construction and real estate legal matters.

Pam: I think he would tell you life is too short, so enjoy the work you do, and life, and take time for family.

How will people remember Brian?

Pam: I believe that Brian will be remembered most as an amazing husband, a very devoted father and grandfather, a dedicated son, and a supportive brother and a friend to all he met. He adored his grandchildren. He was a prominent construction and real estate lawyer and a lifetime UW supporter. He was dedicated to UW engineering and was always willing to give back to UW engineering.

Mallory: He was a real leader in many, many ways—in the civil engineering and environmental law educational area, he had national impact. He was very respected by his peers for how he handled matters and how very civil he was. People appreciated that he could be a mediator and arbitrator, plus also litigate on behalf of his clients, plus help guide the State Bar in enhancing the tools available for the engineering and environmental-related areas of law in Wisconsin. So many people called him fun because they enjoyed working with him. He had a really high expectation of excellence, and he always delivered that. He was an amazing brother, an amazing lawyer, unbelievable dad and grandpa, and a fabulous husband.