Three generations of the Huibregtse family have studied engineering at the University of Wisconsin-Madison. So when family members began exploring opportunities to support the College of Engineering, they wanted to make a gift that would leave a lasting mark.

That idea came to fruition in summer 2019 with a ceremony to christen the atrium of Engineering Hall—a go-to spot for students to study, work on group projects, eat or relax between classes—the Huibregtse Family Commons. 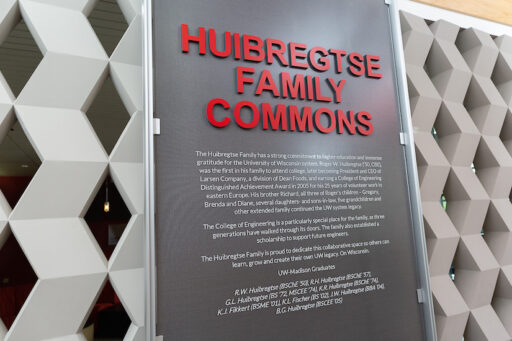 “The University of Wisconsin has been very important to our family. We’ve had six engineers that have graduated from UW, and we wanted to do something that would help future engineers in their studies,” says Roger Huibregtse (BSChE ’50), who started the family’s UW-Madison legacy as the first of his kin to attend college. “I just wanted to give back something that they gave to me when they gave me a good education that allowed me to handle all the things that came before me.”

Roger Huibregtse went on to become president and CEO of the Larsen Food Company, a subsidiary of Dean Foods, and has spent a good portion of his retirement volunteering through a nonprofit to help launch businesses in Eastern Europe. His late brother Richard (BSChE ’57) followed his lead by studying chemical engineering at UW-Madison.

Roger’s son Greg (BSCEE ’72, MSCEE ’74) is a civil engineer, while Greg’s wife Kathryn (BSChE ’74) is an adjunct professor in the Department of Civil and Environmental Engineering. One of Greg and Kathryn’s sons, Brian (BSCEE ’05), is a transportation and traffic team leader with MSA Professional Services in Madison. Another of Roger’s grandsons, Kevin Fikkert (BSME ’01) also graduated from the college and is president of Spindustries, a metal manufacturer in Lake Geneva, Wisconsin.

“It prepared all of us for our lives after school,” says Roger Huibregtse, who also supports the Huibregtse Family Scholarship for students interested in studying abroad.

Now, the family wants current and future students to experience that kind of success—a spirit summed up in one sentence of the naming plaque attached to a wall in the commons: “The Huibregtse family is proud to dedicate this collaborative space so others can learn, grow and create their own UW legacy.”

The commons will also get a boost from recently begun renovations to the exterior of Engineering Hall, a project that will create a more visible and central main entrance leading into the area.

“It is a space that encourages planned collaborations and spontaneous connections, not only among our students but among faculty, staff and visitors to our campus,” says Ian Robertson, Grainger Dean of the College of Engineering. “In so many ways, this gathering space is the heart of our engineering community.”