Sarah Balgooyen completed her PhD in environmental chemistry and technology at the University of Wisconsin-Madison in spring 2019 and has moved right into a hot topic in water pollution. Firefighting chemicals, also known as per- and polyfluoroalkyl substances or PFAS, are estimated to contaminate the drinking water of 16.5 million people in the United States alone. One of those sites is the Tyco Fire Products facility in Marinette. 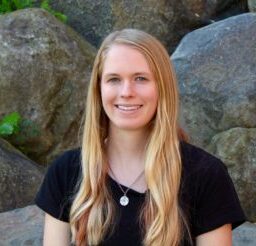 Evidence of PFAS has been found in ditchwater near the company. “Mostly, people are concerned with private drinking water wells, but also there’s the potential for the contamination to get into Green Bay and eventually out into Lake Michigan,” says Balgooyen, a postdoctoral researcher with Civil and Environmental Engineering Associate Professor Christy Remucal‘s research group and an alumnus of Associate Professor Matthew Ginder-Vogel’s lab.

Balgooyen will use her two years of funding as a J. Philip Keillor Water Science Fellow to determine how much of the contamination is moving toward the bay and if it’s going to be an issue for Lake Michigan.

Step one is to clear her lab instruments of PFAS. “That’s tricky because scientists have been finding that PFAS are dangerous at really low levels, so at these low concentrations, they’re hard to measure,” Balgooyen says. “With the instruments we use in the lab, there’s often PFAS in our tubing and in the little components that are made of Teflon or other PFAS-containing materials.”

Step two is to obtain water samples. Balgooyen says she and the rest of the research team plan to sample tributaries around Marinette that lead into the Menominee River or directly into Green Bay. “We’ll see where we can find PFAS. Then, based on the flow of those surface waters, we can gauge how much PFAS might be reaching Green Bay.”

The final part of her experiment will involve lab work to investigate whether the PFAS remain in the water or are being absorbed into river or bay sediments. “This is a key factor in the way these chemicals move around the environment,” Balgooyen says.

The project fits with Balgooyen’s passion for water. “I grew up in Michigan, so I’m used to having a lot of clean, drinkable water around me, but not everyone has that. I think it’s really important for us to monitor that and make sure we all have access to clean water so our citizens’ health isn’t being put at risk,” she says.