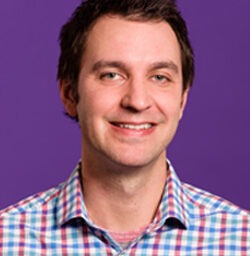 Each year, the College of Engineering recognizes outstanding alumni during Engineers’ Day—a celebration of engineers, held on Homecoming weekend. Chris Klündt is among the engineers we will honor in 2019 at an Oct. 11 banquet.

Chris will be the first to say his path to becoming an entrepreneur was anything but straight, Regardless of whether he was preparing to enter medical school, rubbing elbows with the likes of actresses Anna Chlumsky and Lucy DeVito as a student in the New York City-based Atlantic Acting School, or analyzing securities for a Madison-area investment advising firm, the constant, he says, was confidence in his ability to problem-solve.

Coupling that skill with a great idea, a college buddy, a few solid mentors and a lot of hard work, Chris co-founded StudyBlue, a crowdsourced online study tool that today provides more than half a billion flashcards, notes and study materials as a resource for 20 million students. Launched initially in 2006 at UW-Madison as The Class Connection, it immediately garnered thousands of student users on campus, then expanded to include hundreds of thousands of students at major universities nationwide. Three years later, Chris and his partners made the business “official.” And in July 2018, educational services company Chegg acquired StudyBlue and added it to its portfolio of products.

We are honoring Chris as a visionary entrepreneur who capitalized on the intersection of trends and technology to found a company now used by millions of students to learn collaboratively.

I am a fourth-generation Badger, so it’s been a longstanding tradition. I loved the layout of the campus, the vibe, the feel of the lakes, the student body, the football team and all those fun things that make up a college experience. But one of the big reasons I attended was a program in which some high school seniors were also simultaneously admitted to the medical school.

What classes made the greatest impact on you?

Every semester, the BME program had a team-based project, working with people in the community, nonprofits or even businesses. One of the biggest takeaways was that’s what an entrepreneur is: Roll up your sleeves, ask good questions, seek help from those who know, put in the work, do your research.

As a student, how did you spend your free time?

I had done competitive speech in high school at the national level. Some friends and I restarted the university’s speech team, and I spent the better part of my Saturdays going to tournaments, traveling all over the country. I met my wife through the speech team as well.

What advice would you give students in your discipline today?

Embrace the unknown; be confident that you can solve any problem. A biomedical engineer is a combination of lots of engineering, but you’re not going to know everything. You’re assimilating lots of different skills and exploring a lot of different solutions to solve one problem.

Travel is one of our biggest interests. My wife and I just completed visiting the Seven Wonders of the World last year. We’ve done that the last 10 years, which has been pretty great. Home brewing is my big hobby right now. I just tried for the first time a hazy IPA. I thought that was pretty fun to make and it turned out all right.

My wife, Emily, and daughter, Charlotte. My parents are Aimee and Steve, and I have two sisters, Katie and Anya.