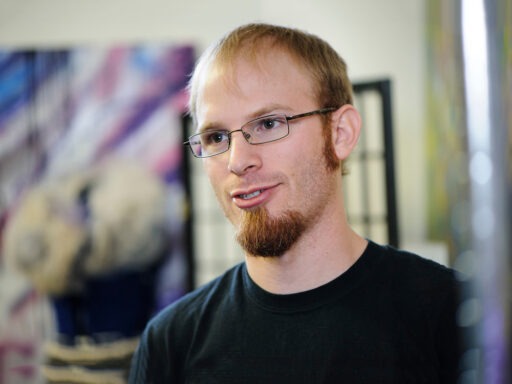 Each year, the College of Engineering recognizes outstanding alumni during Engineers’ Day—a celebration of engineers, held on Homecoming weekend. Chris was among 10 engineers to receive awards in 2017 at an Oct. 20 banquet.

We honored him for leadership in achieving a unique vision of education, entrepreneurship and community development through Sector 67, which has enabled more than 100 companies and entrepreneurs to turn their ideas and dreams into reality.

We chatted earlier this year with Chris about everything from his memories as a student at UW-Madison to his career and his family. Here are his responses to some of our questions.

How did you choose engineering?

I was interested in science and outdoors and stuff like that, so I thought chemistry or biology would be pretty cool. Or I was going to go to Marquette for dental school, which would have been really specific. At SOAR, I went through all of the colleges and never heard chemistry or biology. So, I got to the College of Engineering, for “if you like to work on cars, bicycles, like to build things.” I thought, “This engineering sounds pretty cool.” I worked on dirt bikes and mini bikes and cars and all sorts of stuff when I was in high school, just for fun, in my parents’ garage. And so, it seemed like it’d be something that I was interested in.

How did your experience in the College of Engineering shape your career path?

A friend of mine had seen this innovation-based competition hosted by the College of Engineering. And I thought, “It’s something cool but I thought it was way scary—like no way am I prepared to be in something like that. I’m not an inventor, I’m not a creator.” But at any rate, we showed up to this competition having no idea what we were doing, with just a concept for a computer prototype, and didn’t win anything at all. But the coolest thing was they provided a budget for us to build the prototype. So, every year I competed with different people or different teams with different ideas. And that’s how and why I ended up doing what I’m doing—because I had an opportunity to do something cool. That competition definitely shaped my career and my entrepreneurial path.

Describe Sector 67 and your role there.

I’m the director of Sector 67. I’m the sole founder of it. I started it in 2010 when I graduated. I actually worked on it for about eight months while I was writing my thesis. Writing a thesis is not very much fun—and so it was more fun for me to play around with this idea of generating a company while I was doing a thesis because it’s a great distraction. The space itself is really an agglomeration of a bunch of different workspaces. We’re called a hackerspace, otherwise called a makerspace. It’s a community workshop. We have a welding shop, machine shop, 3D printers, laser cutters, regular printers, woodshop tools and a car lift area—all the tools that people would be interested in. And then we also do classes for kids and try to provide an entrepreneurial space for somebody who’s trying to start a business.

The depth and breadth of all of these people coming in. Every day somebody walks in and they have a new thing they want to do.

Of what professional accomplishment are you most proud?

Just managing to build out a nonprofit resource that’s sustainable, building out a company that functions on its own, and then being able to provide a huge breadth of resources to a whole variety of people over the years.

What advice would you give to current students in your discipline today?

I always tell students to never be afraid of doing anything even if they don’t have the background or the degree or the knowledge. Whether you’re a writer who’s writing about engineering topics, whether you’re an engineer trying to write a business plan, or whether you’re a student who has a noble idea, you need to go out and try those things and talk to people about it, because you’ll find other people who are excited about it and happy to help. There are a ton of opportunities on campus. Be willing to step outside of the boundaries of your degree and go do other things.

Any hobbies or interests?

I fly podcopters and first-person helicopters and stuff like that. I had radio-controlled toys when I was a really young kid. And then in college I built robots and robotic stuff, things like that.