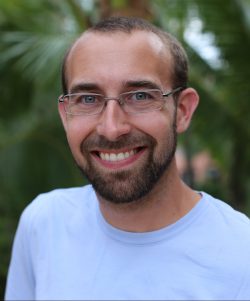 Each year, the College of Engineering recognizes outstanding alumni during Engineers’ Day—a celebration of engineers, held on Homecoming weekend. Justin Beck is among the engineers we will honor in 2018 at an Oct. 19 banquet.

Leveraging his love of gaming with his talent as a programmer and his passion as an entrepreneur, Justin co-founded PerBlue, a mobile gaming company that has grown to some-50 employees in Madison. Millions of people worldwide play its role-playing and strategy games—among them its original, Parallel Kingdom, and its most recent, Disney Heroes: Battle Mode, developed in partnership with Disney.

We are honoring Justin for his leadership in nurturing the Wisconsin entrepreneurial ecosystem, the state’s economic development, and as an exemplary demonstrator of collaborative engineering success.

Why did you choose engineering?

I always liked building stuff as a kid. My dad was an engineer; we were always tinkering with things and I had a passion for software development. I was able to work as a software engineer-like intern and I had done some consulting on other software development projects before heading off to college. Materials science was really interesting to me, especially in the idea that materials are tied into chip design and things like that, but it didn’t take too long for me to realize that I actually wanted to do software.

What was your favorite engineering class?

My favorite class was Computer Science 367, which is Introduction to Data Structures. I have used the content of that class in every one of the job interviews that I have ever participated in. At PerBlue, we interview every engineer on data structures. It really is the most important class in the entire software curriculum from a career-growth perspective.

What is your fondest memory of your time on campus?

In my freshman year at Chadbourne Hall, I roomed with my high school buddy Jason Malinowski, and we met Chris Meyer, who went on to found Sector67. We built a bunch of really exciting projects that year—like a little autonomous robot that roamed the halls. We also participated in the Schoofs innovation competition, which was a great experience.

How did your experience in the College of Engineering shape your career?

I was doing a lot of programming before college but being at UW-Madison, I did even more programming. I was always writing code—I mean all hours in a day. We’d work on a website, then a consulting project for a certain company, then write some code for our Engineering Expo robot, code to run the engineering fountain. This was a key foundation. In my internships with Google and Microsoft I did more programming, and when we started PerBlue I was writing code for a long time. I think if I were just working on the bookwork, I wouldn’t have gotten nearly as much out of it. What I tell students is there’s so much more to college than just the courses. It’s all the student orgs, the projects, the opportunities, the people.

There’s a long list. To name a couple: My parents are first and foremost. My parents were very generous with their time and very service-oriented with the other groups that they were with, whether was a church or family and more. Growing up in that has enabled me to also surround myself with people who are great servants—and by doing that, we get great work done.

And Andrew Hanson, my business partner in PerBlue. He’s always been solid as a rock. We’ve been in the business for 10 years and I would not be here without Andrew’s great head on his shoulders. And that goes for the whole team at PerBlue; we have a great team, and that is what the PerBlue magic is.

What are your hobbies or interests?

I get a lot of satisfaction from staying connected to things that are outside of my core. I’m a fixed wing pilot and a helicopter pilot, and that’s a lot of fun. I also like things like water skiing, snow skiing and traveling. I have been active with the worship groups and I love doing that. There are other community nonprofits that I’m involved with as well. I like paying it forward in some way, shape or form.