Even if you aren’t a physics major, you’ve probably heard something about the fundamental particle called the Higgs boson.

A 1993 book by Nobel laureate Leon Lederman brought the concept to wider attention by dubbing it “The God Particle.” In 2009, the search for the boson, which imparts mass to subatomic particles, began in earnest at the Large Hadron Collider in Switzerland. In 2012, the particle was finally observed there, earning its theorists the Nobel Prize in Physics.

Now, University of Wisconsin-Madison engineers are part of a multi-university team adding another chapter to the Higgs boson saga. They have discovered a form of the famous particle within a superconductor, a material capable of conducting electricity without resistance, generally at very cold temperatures. The research is detailed in a paper recently published online by the journal Nature Communications.

UW-Madison Materials Science and Engineering Professor Chang-Beom Eom and his students Jong-Hoon Kang and Chris Sundahl synthesized a thin film crystal for the project and also performed structural characterizations and transport measurements. Other researchers on the project include teams led by Jigang Wang, professor of physics and astronomy at Iowa State University and senior scientist at the U.S. Department of Energy’s Ames Laboratory; Ilias Perakis, professor and chair of physics at the University of Alabama at Birmingham; and Eric Hellstrom, professor and interim chair of mechanical engineering at Florida State University and UW-Madison Materials Science and Engineering Professor Emeritus.

This Higgs mode is a state of matter found at the quantum scale of atoms, their electronic states and energetic excitations. The mode can be accessed and controlled by laser light flashing on the superconductor at terahertz frequencies of trillions of pulses per second. The Higgs modes can be created within different energy bands and still interact with each other.

Wang says this Higgs mode within a superconductor could potentially be used to develop new quantum sensors.

“It’s just like the Large Hadron Collider can use the Higgs particle to detect dark energy or antimatter to help us understand the origin of the universe,” Wang says. “And our Higgs mode sensors on the table-top have the potential to help us discover the hidden secrets of quantum states of matter.”

That understanding could advance a new “quantum revolution” for high-speed computing and information technologies.

“It’s one way this exotic, strange, quantum world can be applied to real life,” he says.

The project takes a three-pronged approach to accessing and understanding the special properties, such as this Higgs mode, hidden within superconductors.

Wang’s research group uses a tool called quantum terahertz spectroscopy to visualize and steer pairs of electrons moving through a superconductor. The tool uses laser flashes as a control knob to accelerate supercurrents and access new and potentially useful quantum states of matter.

Perakis’ group led the development of quantum models and theories to explain the results of the experiments and to simulate the salient features that come from the Higgs mode.

“Interdisciplinary science is the key here,” Perakis said. “We have quantum physics, materials science and engineering, condensed matter physics, lasers and photonics with inspirations from fundamental, high-energy and particle physics.”

There are good, practical reasons for researchers in all those fields to work together on the project. In this case, students from the four research groups worked together with their advisors to accomplish this discovery.

“Scientists and engineers,” Wang wrote in a research summary, “have recently come to realize that certain materials, such as superconductors, have properties that can be exploited for applications in quantum information and energy science, e.g., processing, recording, storage and communication.”

Chang-Beom Eom is Raymond R. Holton Chair for Engineering and Theodore H. Geballe Professor at the University of Wisconsin-Madison.

The team at UW-Madison acknowledges support by the US Department of Energy (DOE), Office of Science, Office of Basic Energy Sciences (BES), under award number DE-FG02-06ER46327. 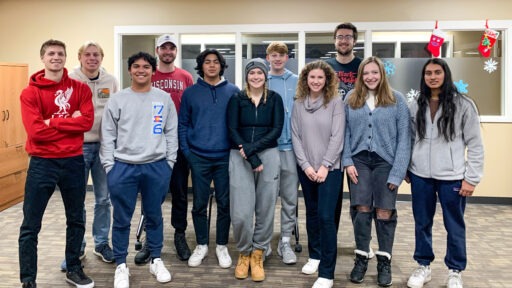 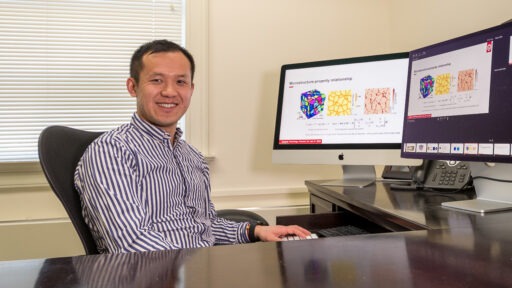