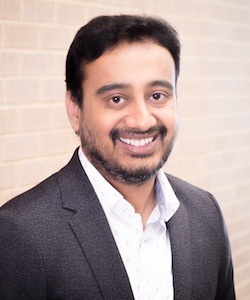 Subbu is a visionary and entrepreneurial leader in technology innovation, including pioneering virtualization of hardware accelerated devices.

How did your experiences in the College of Engineering influence your career path?

Who has played the greatest role in your career?

Early on, I would say, my parents played a huge role. I wouldn’t be here if it were not for them. The second person was a professor in my undergrad, his name was Venkateswaran; we called him Professor Waran. He was the one who introduced me to research, made me read my first IEEE paper. He made a huge impact in my academic career. I don’t think I would have applied to Madison; I wouldn’t have known how to get into or apply to a U.S. school if it weren’t for him. A lot of my friends are always rooting for me. In Madison, I owe a lot to the professor who took a leap of faith giving me a TA-ship; I’ve learned a lot from him and it also paid for my university. With regards to my entrepreneurial career, I owe a lot to my friends, who were always rooting for me since the days of my first startup. And lastly, but most importantly, my wife. She has seen all the ups and downs and has always stood by me.

I’m a more logical person. I cannot just accept a fact as it is; I need to be able to derive it myself. So math and physics became my thing. That’s how I landed in electrical engineering; my undergrad was in electronics and communication. I wanted to be at the borderline of electronics and computers.

What are some of your best memories from your time here?

There’s no thing called Halloween in India. So the very first time I experienced that in Madison, it was amazing to me. On State Street, the Halloween parades are not compared to any city’s. And the other memory is spending time on the lakes, especially Lake Mendota. I would say sitting on the deck with friends or my colleagues, just thinking about research or talking about our project. That was fantastic. Then I would say the long walks and talks I’ve had with my friends—and especially in cold winters—at 2 a.m. or 3 a.m. from the lab to go to our house and crash. We used to talk about everything under the sun, from philosophy to academic research. Our apartment was also one of the party apartments among our friends. So a lot of people used to come Fridays and Saturdays; that was fun.

What advice would you give students in your field today?

Do you have any other hobbies or interests?

I read books, and I especially read biographies. I have started developing some interest in music and playing some guitar. And we have a basketball net and ping pong table at home.

My wife Priti and my mom Manjula.