For almost 30 years, Vicki Bier’s career at the University of Wisconsin-Madison has focused on risk and decision analysis. As a professor of industrial and systems engineering, she has used complex mathematical models to improve nuclear safety and homeland security. She served as department chair for more than five years and has graduated 18 PhD students (thus far).

In 2016, two of those 18 students decided it was time to honor Bier’s contributions to her field with a special conference held in July 2017 in Beijing, China.

Chen (Mavis) Wang, an assistant professor of industrial engineering at Tsinghua University in China, and Jun Zhuang, an associate professor of industrial and systems engineering at the University of Buffalo in New York, organized the International Conference on Risk Analysis, Decision Analysis and Security that Bier kicked off with a keynote lecture.

Half her PhD graduates attended the meeting and eight gave presentations in areas ranging from aviation and railway safety to software reliability. Bier also enjoyed the chance to meet some of her academic grandchildren: those trained by her own former students.

“It was great to learn that I’m having an influence on people I have never even met,” she says. “And I was very happy to hear that many of my students and their trainees are doing important practical work that is making the world a safer place.”

But Bier isn’t ready to plan her retirement just yet.

Having worked as a consultant for the nuclear industry for the first six years after earning her PhD, she found herself revisiting that area of application after Japan experienced its first nuclear disaster at the Fukushima Daiichi power plant in March 2011. This time, however, she became especially interested in the social and economic impact of the massive relocations of people who were directly affected by the accident.

“When [Professor Emeritus of Engineering Physics] Mike Corradini and I studied the social disruption caused by Fukushima with funding from the Idaho National Laboratory, we were surprised to discover that relocation, unlike short-term evacuation, has almost not been studied at all,” Bier says.

Corradini and Bier evaluated how an accident of this kind would affect the United States, using five of the nation’s 66 nuclear power plants (containing 99 nuclear reactors) as examples. They found that relocation needs varied greatly by area, primarily driven by population densities.

“Some of the impacts were as bad as, or even worse than, Fukushima,” Bier says. “That was a pretty big deal and made me realize that we ought to study this problem in more detail so that we can better prepare for a potential emergency.”

Thinking about the kinds of events that cause massive relocations, Bier noticed that some occurred more randomly than others. Nuclear accidents, large-scale terrorist attacks and natural disasters, such as earthquakes and hurricanes, are inherently less predictable than sea level rise due to global warming, since climate models can pinpoint areas most likely to be affected in the near future.

According to demographic projections, the number of Americans who may eventually need to relocate away from coastal areas is on the order of 10 to 13 million, most of whom live in 10 major urban areas that will likely experience flooding. For this kind of large-scale relocation, the aftermath of Hurricane Katrina in 2005 provides important lessons learned. 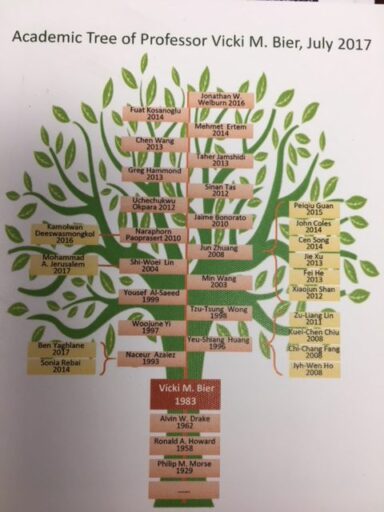 Researchers found that those who left New Orleans right after Katrina typically didn’t decide where to move based on what made the most economic sense. In crisis mode, people are less influenced by job opportunities and housing costs and more strongly driven by proximity and existing social networks. Economists like Adam Rose at the University of Southern California have developed mathematical models that put a price tag on these kinds of ad hoc decisions.

Using quantitative tools similar to Rose’s models, Bier hopes to help people make choices that are more sustainable in the long term—which may include incentives to deal with disaster by avoiding it. She argues that people, both individually and as a society, are often better off moving away from at-risk coastal areas before a disastrous flood occurs.

This behavior can be encouraged with a variety of policy tools, such as tax incentives or subsidies for public infrastructure development further inland. Since people don’t move very frequently, the benefits may take decades to accrue, but such incentives can make a difference when people decide to move anyway because of a new job, a child’s graduation or retirement.

Regardless of the type of disaster, Bier believes that some level of preparation is better than none and likes to drive that point home with a flu shot analogy.

“Every year, we have a plan ahead of time that can and will be modified based on the unique characteristics of the flu season’s dominant strain,” she says. “If it is more lethal for pregnant women or young children, or if there is a shortage of vaccine, the specific recommendations will change, but there is a general plan to start with. I think having better policies and procedures in place as a starting point for dealing with natural or manmade disasters would be very helpful as well.”