Greg Johnson graduated from UW-Madison with a bachelor’s degree in materials science and engineering in 2016. Since then, he’s earned a master’s degree and landed a good job at the biomedical company Medtronic in St. Paul, Minnesota.

But four years after flipping his tassel, his hard work as an undergrad is still paying off; early in 2020, Johnson received a patent in his name, along with MS&E and Engineering Physics Professor Kumar Sridharan and fellow student Ben Maier, who earned his doctorate in materials science and engineering from UW-Madison in 2019.

The journey that led to the patent began in 2013 when Johnson was looking for a laboratory job. A staff member introduced him to Sridharan’s cold spray group, which hired the sophomore.

The project was no mindless, after-school job. In March 2011, the nuclear disaster at the Fukushima Daiichi plant in Japan revealed limitations of the zirconium alloy fuel rods used to house uranium pellets in reactor cores. Under normal conditions and even during some accidents, the rods worked well to contain the uranium. But under extreme conditions of temperature increase, like those that occurred at Fukushima, the zirconium alloy oxidized rapidly when exposed to steam, releasing heat and hydrogen which resulted in the accident.

Sridharan believed that a powder cold-spray deposition might reduce the oxidation rate of the zirconium rods. In the process, a spray gun shoots powdered metal at the rods at supersonic speeds, creating a protective metal cladding around them. In theory, the coating prevents the zirconium rods from oxidizing as quickly, thus adding precious time for technicians to intervene before the destruction of the reactor core.

The research, sponsored by the U.S. Department of Energy and conducted in collaboration with Westinghouse Electric Company, was much more fast-paced than normal nuclear research projects, which often take many years or decades. “The pressure was high to produce results,” Sridharan says. “Ben and Greg worked very hard and fast. They were instrumental in the early stages and through the course of the project.”

In particular, Maier served as a mentor to Johnson, and the two worked out many practical problems associated with the cold-spray process—including what size particles the powder should have, what gases should power the spray gun, and what the optimal pressure should be. The student researchers set up and conducted the tests and collected the data; Johnson retrieved and polished the test samples, and Maier trained him to use the microscope so he could help analyze the data.

Despite being an undergrad, Johnson says Maier, Sridharan and their colleagues at Westinghouse took his ideas seriously, and because of that he feels that he made several intellectual contributions to the project in addition to his hands-on labor.

Eventually, the researchers found a chromium-based cladding with the characteristics they were after. In 2016, they applied for a patent on the process, Cold spray chromium coatings for nuclear fuel rods, along with Westinghouse. In the meantime, Maier earned his PhD, with a focus on the cold-spray project, and took a position at Westinghouse, which will soon test the chromium-coated rods in live nuclear reactors. Johnson continued on with the cold-spray research at UW-Madison, earning his master’s degree in materials science and engineering in 2019.

Sridharan says the two should be very proud to have their names on the patent. “It’s a big deal for anyone to have a patent. What made me especially proud was having these two young engineers on it,” he says, pointing out that this patent is also one of the highlights of his long career.

Maier is glad to have the patent on his resume, but he’s even more grateful for the project itself, which led to a career in nuclear energy, where he’s still working with the rods. “I think it’s really unique to work on a project in graduate school and have it be so relevant to the industry when it’s completed,” he says. “My research has an application and a goal that I’m still working toward.”

Johnson says being listed on the patent is a real point of pride. “It’s kind of a dream come true, honestly. When I was a little kid, I always wanted to be an inventor. As I got older, I thought ‘What are the chances of that happening,’” he says. “Getting my name on a patent is a pinnacle. It’s a real honor.” 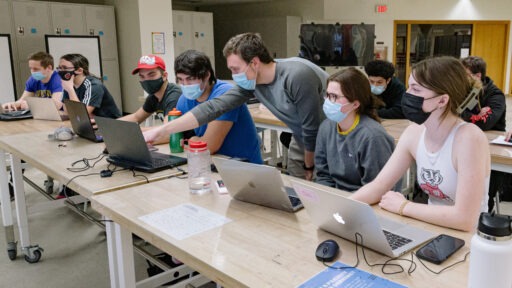