When you take a pill, the drug passes through your system—but its healing effects can come a cost: Along the way to its intended location, the drug can dose, and harm, healthy tissues, too.

Materials scientists at the University of Wisconsin-Madison hope to reduce the side effects of medicines and boost their efficacy by delivering them only to their intended targets within the body.

And they have laid out the theoretical basis for a drug-delivery system that uses the power of magnets to release therapeutic molecules right where they’re needed.

“This is on-demand control of drug release,” says Jiamian Hu, an assistant professor of materials science and engineering and fellow of the Grainger Institute for Engineering at UW-Madison.

Hu, an expert in computational theoretical modeling, and colleague Chang-Beom Eom, a world leader in materials synthesis, described their concept for a magnetic drug delivery system in a paper published in April 2019 in the journal Applied Physics Letters. The paper was also selected as an editor’s highlight in the issue.

On-demand drug release has long been a goal for clinicians around the world.

Imagine a future where cancer patients would no longer experience the ravaging side effects of chemotherapy because the toxic chemicals that kill cancer cells only exert their lethal effects inside tumors, bypassing healthy tissues.

Biologists have been working on specialized packaging systems that release medicines on cue for several years—some methods use small spherical containers made out of fat called liposomes, while others hinge on artificial nanostructures comprised of DNA.

Hu and Eom looked to a less organic material for their drug delivery system.

“We are materials scientists,” says Hu. “We are taking a different approach.”

Hu and Eom looked to a very tiny core-shell material for their drug delivery system comprised of a magnetic core and a shell made up of a special material called ferroelectrics that can attract or repel electrically charged molecules. (Think of a peanut M&M candy, with the nut representing the magnetic center and the chocolate coating standing in for the ferroelectric shell.) All together, the core-shell magnet-ferroelectric particle would be roughly 30 nanometers across, which is roughly forty thousand times smaller than a grain of sand.

The researchers took advantage of the fact that many drug molecules, including some commonly used chemotherapies like cisplatin, carry a partial electric charge.

In other words, they’re polar.

Polar molecules can be bonded to the charged ferroelectric shell. Importantly, an external magnetic field (which could be supplied by an MRI machine) can alter the strength of the bonds and even completely break the bonds, due to a special physical phenomenon called ‘magnetoelectric effect.’

Hu and Eom hit upon the notion of using core-shell nanoparticles to capture drug molecules. They envision therapies consisting of small particles coated with drugs. The medicines would not be active until clinicians applied an external magnetic field to release drug payloads from the particles’ surfaces. As a bonus, doctors could even use external magnets to manipulate the particles inside patients’ bodies.

“You can use magnets to guide the small particles to the places where you need to release the drug, then change the magnetic field condition to release it,” says Hu.

But not just any old refrigerator magnet will do. Hu designed precisely composed stacks of thin layers of ferromagnetic materials and other coating materials.

Crucially, Hu consulted with Eom—a world renowned expert in growing never-before-seen materials one atomic layer at a time—to determine if the stacks that he designed would be feasible to synthesize in the real world. Not surprisingly, Eom has grown similarly complex multilayered materials in the past.

“It’s very beneficial to talk with experimentalists,” says Hu. “We needed to know our stacks could really be fabricated.”

Currently, the researchers are taking steps toward doing just that. That initial step will allow them to begin experiments, in the lab, using real drugs.

“This is all preliminary work; nobody has thought about this before,” says Hu. “It’s one small step, but it’s progress as long as at every step, we produce something.”

Chang-Beom Eom is the Raymond R. Holton Chair Professor in Engineering and Theodore H. Geballe Professor in the UW-Madison Department of Materials Science and Engineering. The research was supported by a startup fund from the University of Wisconsin-Madison. 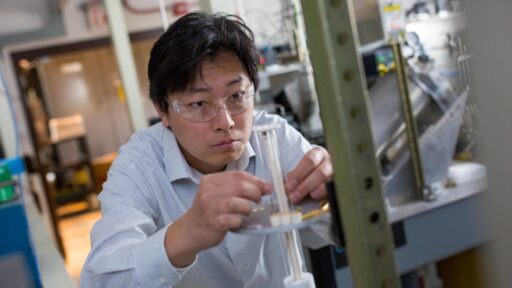 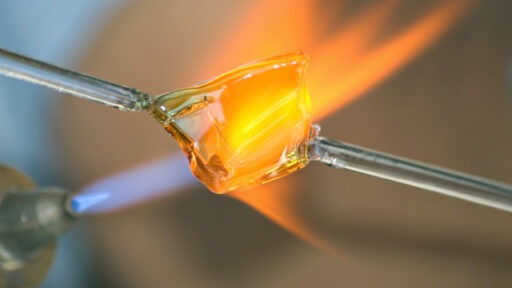 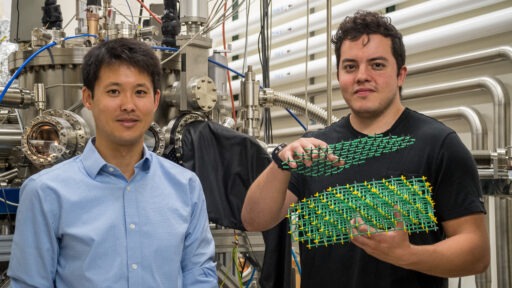