Buckingham U. Badger, or Bucky, for short, is the beloved mascot of the University of Wisconsin-Madison, and he has worn essentially the same cardinal red and white striped sweater since 1940.

But during the summer of 2018, Bucky finally tried on some new outfits, thanks to a public art event called Bucky on Parade. Madison witnessed an invasion of 85 six-foot tall fiberglass likenesses of UW-Madison’s favorite burrowing mammal—each one decked out in technicolor splendor by local artists. 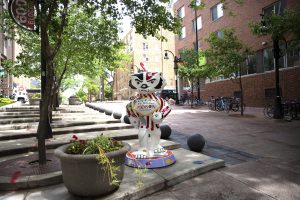 One of those artists was Aislen Kelly, a chemical and biological engineering student who began her UW-Madison college education in fall 2017. Inspired by the community aspects Madisonians hold near and dear, Kelly painted the “Madison Traditions Bucky,” which stands proudly at the intersections of State and Frances streets downtown.

“I thought it would be a good opportunity to show how much I love this community and I love this town,” says Kelly.

She found out about the Bucky on Parade project through social media and submitted her design proposal shortly after arriving on campus as a freshman.

Kelly adorned Bucky’s red-striped sweater with images of local legends and landmarks—the State Street sign on his right shoulder, the Capitol dome on his torso, a pink flamingo on his left forearm, and an iconic yellow Memorial Union sunburst emblazoned on his back. A modified version of the famous Las Vegas sign proclaims “Welcome to Fabulous Madison Wisconsin” across Bucky’s chest.

Growing up as the daughter of a political cartoonist, Kelly spent her childhood surrounded by art. Her preferred media are usually pencils and pens on paper, so painting a giant fiberglass statue was a substantial departure from her comfort zone.

Unlike many of the other artists participating in the project, Kelly did not have her own studio. In fact, when she took a rental truck to pick up the blank statue from the Madison Area Technical College campus in the first week of February 2018, she still hadn’t found a dedicated space in which to work, despite many inquiries to building managers across campus as well as to her coworkers, friends, and resident advisors about potential locations (although her roommate was open-minded and enthusiastic about the notion of cohabitating with a giant fiberglass badger).

And while she carefully measured Bucky’s height and breadth when planning her artwork, complicating matters further was her discovery that the statue’s circular base was much too wide to fit through the door of her dorm room in Sellery Hall.

Fortunately, the building’s facilities director found a little-used basement hallway adjacent to the laundry room where Kelly could work on the statue.

For slightly more than two months, Kelly painted late into the night to finish her artwork in time for the April 7, 2018, deadline, all while balancing a busy courseload, a part time job at the coffee stand at the Gordon Avenue Market, and a position on the club softball team.

“I knew it would be work, but I didn’t know how much work,” she says.

That hard work paid off when her statue was finally unveiled.

“It’s been really rewarding seeing it, seeing how other people perceive it,” says Kelly, noting that her friends frequently send pictures of themselves with her creation. At the end of the summer, a number of the statues will be auctioned off at a gala finale party, with the proceeds benefitting the nonprofit organization Garding Against Cancer, the Madison Area Sports Commission, and other community charities.

“That’s what the project was meant to do,” Kelly says, “bind the community together for a common cause.”