Genetically speaking, we are more bacterial than human: Our “second genome” of microbial genes outnumbers our human genome more than 100-fold, containing more than three million bacterial genes in the gut alone.

The importance of this gut microbiome for human health has now been well established: Deviations from its balanced state have been associated with conditions ranging from neurological and immune disorders to cancer. 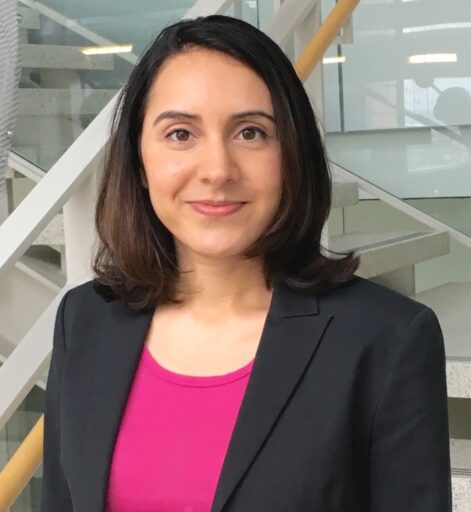 But understanding the complexity of the communities in which these microbes coexist is still a challenge—one that Ophelia Venturelli, an assistant professor of biochemistry at the University of Wisconsin-Madison, spends much of her time tackling.

Venturelli, who has affiliate appointments with the Department of Chemical and Biological Engineering and the Department of Bacteriology, is researching a variety of ways to manipulate a dysfunctional microbiome in order to restore or improve human health. Her goal of purposefully editing an entire microbiome is a tall order, given that we have only recently discovered the technology for editing single molecules of human DNA.

To accomplish this formidable task, Venturelli draws upon her background and training in multiple disciplines: biochemistry, biophysics, control and dynamical systems theory, and bioengineering.

“My lab uses both computational and experimental methods to understand how interactions between the gut microbiota influence a variety of community-level tasks,” Venturelli explains. “This collective behavior then impacts the host’s energy balance, immune response and other important functions.”

By exposing gut microbiota to environmental perturbations, Venturelli also hopes to learn more about their response to external influences, such as changes in our diet or medication, and to internal processes, such as aging. This helps her design targeted interventions that steer gut microbiota toward desired states.

Working at the intersection of computational modeling and biochemical experiments at a systems level, rather than a detailed molecular level, was a career goal that Venturelli began to pursue when she realized—in her sophomore year at Stanford University—that biology alone did not satisfy her desire to conduct quantitative research.

“During a summer internship in a research lab, I discovered my fascination with applying computational tools to dissect and predict biological systems, and then test and re-test those predictions in experiments,” she explains.

A few years later—after earning her PhD in biochemistry and biophysics from the California Institute of Technology in 2013—she identified the microbiome as a rich area of application for this kind of interdisciplinary science.

During a three-year postdoctoral stint in Adam Arkin’s lab at the University of California, Berkeley, she secured microbiome research funds from the United States Department of Defense. The results of that postdoctoral project became critical preliminary data for the grant applications she submitted after joining the UW-Madison faculty in July 2016.

And thanks, in part, to her first junior faculty year being free of teaching commitments, she was extremely successful in growing her lab’s people power with these grant applications.

Since July 2016, she has received the Shaw Scientist Award from the Greater Milwaukee Foundation; a MIRA grant (maximizing investigators’ research award) from the National Institutes of Health; a young investigator award from the U.S. Army Research Office; and one of 13 multi-investigator grants from UW-Madison’s Microbiome Initiative.

While the gut microbiome is the common thread that connects all of these grants, each project represents a unique and distinct approach to its investigation or manipulation. Given the complexity of the system, Venturelli says it is critical to pursue a variety of strategies and collaborate with experts from diverse backgrounds to realize the potential of engineered microbiota to benefit human health.

As an example, her UW-Madison-funded project includes the Department of Bacteriology’s Federico Rey, who established the university’s first germ-free mice facility, and Daniel Amador-Noguez, who studies metabolomics, or microbial contributions to the grand total of chemical reactions that maintain living human cells; and the Department of Chemical and Biological Engineering’s Jennifer Reed, who is an expert in engineering microbial metabolism with systems biology tools.

In addition to these collaborations, Venturelli appreciates the access to a diverse group of students that results from her affiliation with multiple departments. She currently supervises graduate students from chemical engineering, microbiology and biophysics, and has two postdocs who received their chemical engineering PhD at UW-Madison.

“The engineering students tend to be goal-oriented and bring strong quantitative skills, while the science students tend to have more lab experience and a deep interest in fundamental scientific questions,” Venturelli says. “I really enjoy the diversity of perspectives they bring to their daily work because it enhances the lab culture and nurtures everybody’s creativity.”

Consistent with that diversity of trainees, the lab’s projects often have a twofold goal: Developing genetic tools to manipulate specific bacterial species in the gut microbiome (the engineering aspect) and deciphering microbial interactions that shape collective functions (the basic science question).

“Right now, we don’t understand how individual cells process information from the environment and how that processing affects the overall population dynamics,” Venturelli says. “Since I believe this relationship is crucial for microbiome stability and function, my long-term research goal is to connect these two scales.”

Drying process could be key step in the development of life