New technologies and an influx of private investment are sparking developments in a field that seeks to realize a longstanding energy dream.

The lithium in your laptop battery could be converted into fusion fuel that could power the city of Madison, Wisconsin, for a year.

Professor David Anderson likes to point that out to his students to grab their attention. It’s the kind of grand promise that makes fusion energy sound so tantalizing, particularly in the context of our ongoing struggles to slow the warming effects of climate change. Fusion, the process that powers the sun, generates no greenhouse gases and only minimal nuclear waste.

And while renewable energy sources such as solar and wind can supply a growing portion of the energy we need to replace fossil fuels, fusion advocates note they often occupy large amounts of land, are dependent on weather, and currently can’t provide the necessary baseload power to meet large-scale consumption.

Fusion can, they say. It also avoids the safety and waste concerns associated with nuclear fission.

“It’s the energy of the stars. It’s the energy of the future,” says Anderson, the Jim and Anne Sorden Professor of electrical and computer engineering and one of the scientists who’s helped establish UW-Madison as a longstanding U.S. leader among universities that conduct fusion and plasma physics research. “Limitless power.”

But, as you might expect, fusing atomic nuclei by heating hydrogen isotopes ideally deuterium culled from seawater and the less-abundant tritium generated from lithium—to hundreds of millions of degrees and safely containing the resulting plasma (ionized gas) is a Herculean task.

Scientists began to study the fundamental physics behind fusion in the 1920s and started creating experimental reactors in the late 1940s. While the sun relies on gravity to confine its plasma, most earthbound efforts employ magnetic fields to do it. That’s how the colossal fusion experiment ITER (the largest magnetic plasma confinement device ever built) will work upon its completion in southern France, with a target date of 2027 for running its first plasma.

ITER is the result of an unprecedented and complicated international collaboration and investment of, officially, $22 billion, with an equally audacious aim for a field seeking progress toward viability: to produce more power than it consumes, something for which no previous fusion reactor has been specifically designed. In the process, ITER will allow researchers to study “burning plasma” that relies more on self-sustaining internal fusion reactions than on external energy fed into the system.

While that milestone is at least a decade and a half away, there are more immediate developments that stoke optimism in researchers like Oliver Schmitz, the Thomas and Suzanne Werner Professor of engineering physics and the college’s associate dean for research.

“I’m more hopeful than ever that it will work out,” says Schmitz, who leads research projects focused on the interactions between high-temperature plasmas and reactor walls at several international fusion facilities.

In September 2021, researchers at Massachusetts Institute of Technology (MIT) and the spinoff company Commonwealth Fusion Systems (CFS) broke a magnetic field strength record in demonstrating their high-temperature superconducting electromagnets, which could make more compact—and, thus, more economically viable—fusion reactors a possibility. The new magnets are the centerpiece of the SPARC reactor, a joint MIT and CFS effort to surpass that break-even net energy barrier by 2025.

Advances in supercomputing and in plasma theory and modeling in recent decades have sharpened researchers’ ability to optimize experimental reactor designs, and the emergence of additive and advanced manufacturing open up new possibilities for quickly prototyping and precisely producing components for reactors.

“We finally have all these advanced tools, all at the same time,” says Engineering Physics Assistant Professor Stephanie Diem, rattling off the aforementioned technological breakthroughs along with advances in alloys and materials for reactor walls. Diem directs the Pegasus-III fusion and plasma science experiment at UW-Madison. “There’s been a convergence of a lot of things in recent years that makes fusion energy more achievable in our near future.”

The field also has more money flowing into it, with private equity firms entering the fray. While publicly funded national and international facilities have historically driven the field forward, startups like CFS, General Fusion and TAE Technologies are now aggressively chasing their own timelines to satisfy their investors. At least 35 fusion companies exist worldwide, boasting combined financial backings in the billions of dollars. 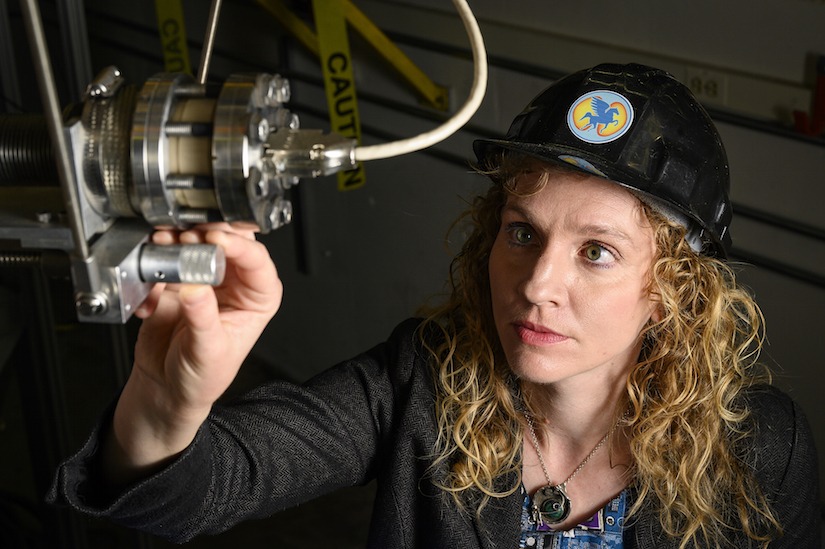 “There’s been a convergence of a lot of things in recent years that makes fusion energy more achievable in our near future.”
Stephanie Diem, Assistant Professor of Engineering Physics

Anderson is a founder of one of those startups, along with Chris Hegna, the Harvey D. Spangler Professor of engineering physics and an expert in theoretical plasma physics and computational modeling. Their Type One Energy Group hopes to bring a large-scale fusion reactor to the Madison area, building upon lessons from the Helically Symmetric eXperiment (HSX) in Engineering Hall.

The lion’s share of fusion experiments around the world are devices called tokamaks, powered by most of the fusion research funding since the Soviet scientists made breakthroughs with the donut-shaped reactor in the late 1960s. ITER is a tokamak, and that reactor class is the consensus pick to achieve viable fusion energy output first. The new Pegasus-III in the basement of the Engineering Research Building is a spherical tokamak, a more compact design that resembles a cored apple and allows for more efficient use of its magnetic field to confine plasma. Diem and her team will test innovative plasma startup techniques on Pegasus-III that could reduce the cost and complexity of future fusion reactors.

HSX, directed by Anderson, is an example of a stellarator, the leading alternative to the tokamak. Rather than driving current through the plasma to confine it as tokamaks do, stellarators rely on twisted electromagnetic coils around the outside of the vessel to create magnetic fields—in theory, sacrificing design simplicity and inherent symmetry for the ability to precisely control the plasma physics externally. Results from HSX have demonstrated the value of using plasma theory and modeling to dictate coil design, making it either the world’s first or second optimized stellarator, depending upon who you ask (some reserve that honor for Wendelstein 7-AS, the predecessor to the Wendelstein 7-X in Germany, the world’s largest stellarator).

While Type One is still courting investors, another type of fusion reactor—representing more immediate possibilities within the field beyond energy production—is under construction at UW-Madison’s Physical Sciences Laboratory in nearby Stoughton. The Wisconsin HTS Axisymmetric Mirror (WHAM), led by Physics Professor Cary Forest, with support from Schmitz, is reviving a “mirror” reactor design that researchers largely abandoned in the 1990s. Leveraging the high magnetic fields available through advances in high-temperature superconductivity, the mirror path and much simpler cylindrical fusion reactors they embody again appear feasible. WHAM, which will be the first to take advantage of these technologies, will focus on efficiently producing the neutrons generated in fusion reactions.

Those high-energy neutrons, in turn, can be used to manufacture isotopes with a range of medical applications, from diagnostic scans to treatments, as well as other imaging tools. That’s precisely how SHINE, the Janesville, Wisconsin-based company founded by three-time alumnus Greg Piefer (BSEE ’99, MSNEEP ’04, PhDNEEP/MedPhys ’06), is applying fusion technology. To Schmitz, SHINE embodies the current opportunity available with fusion, regardless of its transformative potential in the energy sector. It’s why he, Forest and others at UW-Madison are pursuing funding to support fusion industry development—through education and technology—in southern Wisconsin.

“Fusion is happening now,” says Schmitz. “The opportunity for building industry and a workforce and educating technology leaders is now, and not in 10 or 15 years, because people think fusion is 30 years down the road. Workforce readiness is key to drive the technology innovation underlying a future fusion industry.”